Before discussing the singularity of this particular copy of Jean Giono’s The Song of the World (1934), it’s worth briefly discussing the author’s and novel’s background. Giono was born in 1895, hailing from Manosque, France, where a majority of his work is grounded in. Aside from his impressive amount of publications, which mount to over fifty, he was the first to translate Melville’s Moby-Dick in French (along with Lucien Jacques). This work transformed into Melville: A Novel, which the NYRB details as having been made because “the publisher persuaded Giono to write a preface, granting him unusual latitude. The result was this literary essai, Melville: A Novel—part biography, part philosophical rumination, part romance, part unfettered fantasy. Paul Eprile’s expressive translation of this intimate homage brings the exchange full circle.” 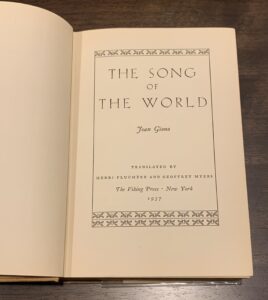 Le Chant du Monde (The Song of the World) was first published approximately five years after Giono’s debut novel, Colline. The Song of the World is noted as being Whitman-esque in its descriptions of nature. The Modern Novel’s website captures this portrayal: “Virtually every chapter of this book starts with a detailed description of the landscape where the chapter is set, from the mountain like a recumbent human to the winter landscape or simply a loving portrait of the land, the forests, the fields and the hills, with humans almost incidental.”

What’s remarkable about this particular copy of Giono’s work is that it was gifted to Sherwood Anderson from Thomas Wolfe. Anderson was a sort of literary mentor and inspiration to a variety of writers, like Hemingway, Faulkner, Steinbeck, and, of course, Wolfe. 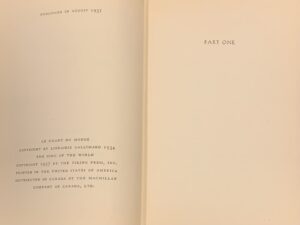 Joanne Marshall Mauldin discusses meetings between Wolfe and Anderson in her work Thomas Wolfe: When Do the Atrocities Begin? Both men “dined at Cherio’s” with Maxwell Perkins (78). Also, Wolfe briefly stayed with Anderson, and this trip “left vivid impressions,” since the bed Wolfe stayed in wasn’t long enough for his 6’6” body (79). He didn’t tame his appetite there either, eating “a dozen corn cakes” (79). Eleanor Anderson, Anderson’s wife at the time, spoke about Wolfe’s time with them in Troutdale, Virginia. Her sentiments toward Wolfe weren’t overly favorable, because he was on the cusp of leaving Scribner’s and only had harsh words to say about Perkins: “‘He said things about about Max Perkins that were utterly inconceivable. I told Tom at every pause in conversation that I knew he didn’t mean what he was saying’” (79).

However, in regards to Wolfe and Anderson’s relationship, “in temperament and their work [they] displayed many likenesses” (79). Like Anderson’s friendships with Hemingway and Faulkner, his relationship with Wolfe became fraught with the following encounter occurring just days days before Wolfe’s leave with Scribner’s in late 1936:

Anderson and Wolfe accidentally met at the Brevoort. Wolfe was very drunk. Wolfe told Anderson he was ‘washed up’—a brutal but accurate assessment. Inevitably Anderson’s writing friends—Faulkner, Hemingway, Basso, and Wolfe—not only but the hand that fed them, they severed it at the wrist. Evidently the mop-haired Anderson incited attack; Wolfe chomped. The next day Anderson notified Wolfe, ‘As you have expressed such a hearty desire to chuck our acquaintance—why not?’ (93)

Before this line of friendship severed, Anderson and Wolfe had a mutual admiration for each other’s work. David Herbert Donald details Anderson’s praise in Look Homeward: A Life of Thomas Wolfe that “Anderson’s impressionistic portrayal of small-town residents as grotesques […] had a lasting influence on Wolfe” (78). Wolfe, moreover, wrote to Anderson in 1935 that

‘it seems to me ever since I began to read your books when I was a kid of twenty, […] that you got down below the surface of our lives and got at some of the terror and mystery and ugliness and beauty in America better than anyone else.’ (78)

Though its unknown what year Wolfe gifted Giono’s novel to Anderson, the right side of the inside cover signed by Anderson himself, along with the lines: “Presented by Tom Wolfe.” Because of the 1937 publication date of this translation of The Song of the World, it’s evident that Wolfe didn’t entirely sever the hand that once fed him, but he stitched it back. The impressionistic nature of Giono’s book opens up many interpretations as to why Wolfe gave it to Anderson. Was Anderson already a fan of of Giono’s work? Did Wolfe like the book and gave it to Anderson in hopes that he would, too? If that was the case, did he think Anderson would appreciate Giono’s delicate and depictions of nature? 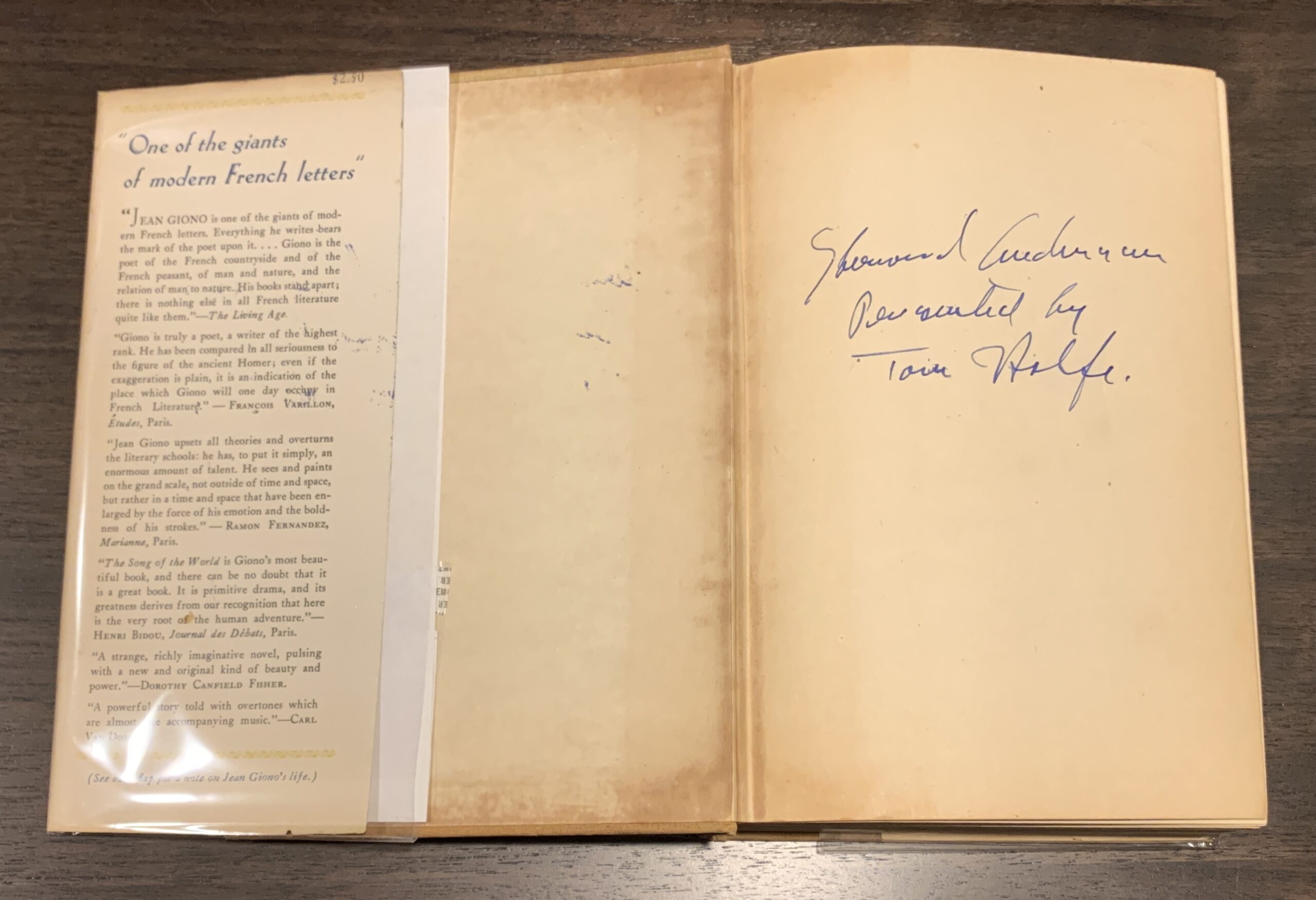 Anderson considered Wolfe to be a “‘real novelist’” unlike himself, finding Of Time and the River a “‘gorgeous achievement’” in 1935 (58). This mutual adulation toward one another, which Hilbert H. Campbell follows in “Sherwood Anderson and Thomas Wolfe,” was a friendship mixed with both laudation and bitterness.