I find myself wishing for someone with whom to compare William Faulkner, but to compare this writer from Mississippi with James Joyce or Marcel Proust or Chekov or Dostoevsky gets one nowhere, for Faulkner is definitely American…. If Faulkner is mad, then James Joyce is equally so; if Faulkner is obsessed with futility and insanity, so is Fyodor Dostoevsky. It is true that The Sound and the Fury is insane and monstrous and terrible, but so is the life that it mirrors…. I believe simply and sincerely that this is a great book.

While The Sound and the Fury is broken into 4 sections — 3 of which follow the inner-monologues of 3 brothers — As I Lay Dying has 59 sections that differentially capture the thoughts of 15 characters. The Modern Library conjoined the two novels into a single volume in 1946 that featured a new foreward by Faulkner (pictured). 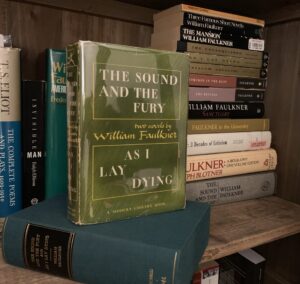 What makes this particular copy of the novel special is that Faulkner inscribed it to his mentor, Phil Stone. Joseph Blotner, Faulkner’s earliest biographer, notes that Stone came back to Mississippi, after obtaining a degree from Yale, wanting to share his knowledge of literature with others. Katrina Carter had told Stone “that he ought to know ‘this little Falkner boy who writes; he’s always telling stories'” (44). Stone had lent Faulkner works of Keats, along with modern novels (45). Stone “drilled the younger man in punctuation and lectured him on goals as well as grammar” — lessons that Faulkner tossed away when writing The Sound and the Fury (45).

Faulkner’s brother, Jack, said “‘it was Phil who educated Bill'” (46). Visible in the photo below, Faulkner wrote his dedication to Stone on the backside of the front cover. Unlike the typical William Faulkner signature that accompanied almost all of his other signed novels, the colloquial signature of “Bill” makes this edition one-of-a-kind. On the right, either Phil or Emily (presumably) inscribed their names, adding the detail that the novel was from Wm. Faulkner. 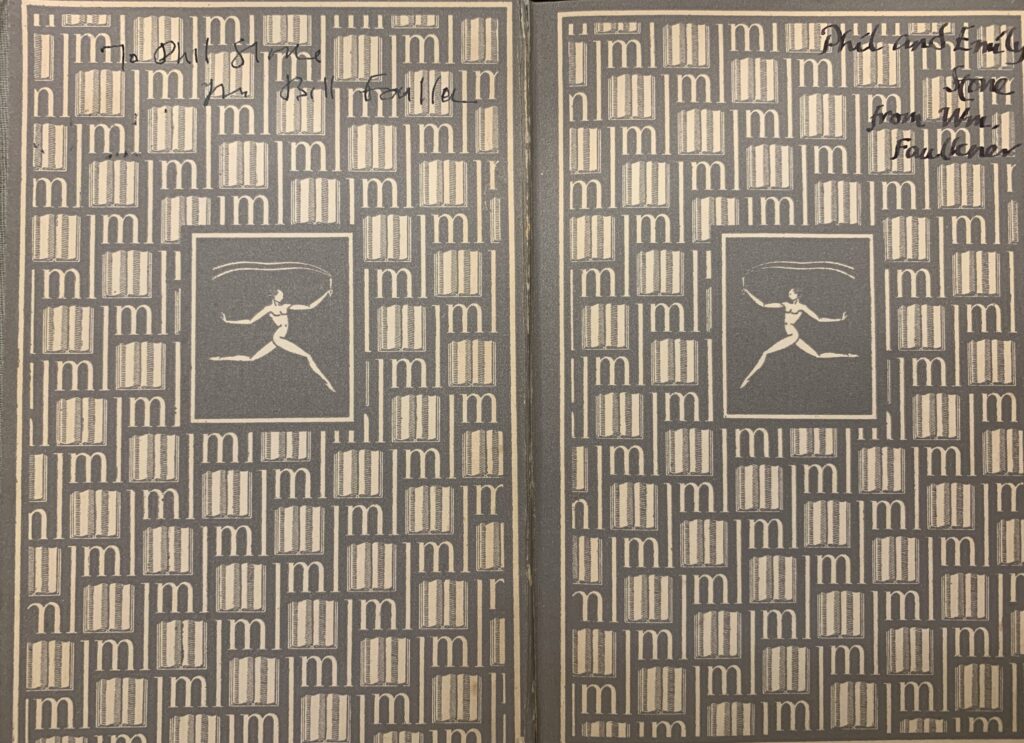