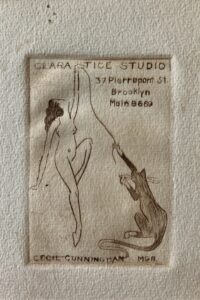 Marti Savage (Tice’s great-niece) illustrated Clara Tice’s eccentricity in a singular question during our phone conversation: “Did you know that she went to a party naked on a horse?”

Animals and Nudes, an art pamphlet of Tice’s, begins with another question–this time penned by Frank Crowninshield: “Who Is Clara Tice?” He expresses disbelief toward those who are not familiar with her and her work given how often this question “keeps cropping up in drawing-room conversations in theatrical bureaus, in newspaper offices, at Bohemian studio parties, in Fifth Avenue plus and in the smarter waffle-emporiums of Greenwich Village.”

So, who is Clara Tice? She was born in 1888 in Elmira, New York. Kristine Somerville, in her article “Clara Tice and the Art of Being Bohemian,” writes that she was one of three children raised by progressive parents: “her parents encouraged her creativity, supported her drawing, which showed an expansive, free-flowing elegance.” She briefly attended Hunter College, dropping out “when the well-known painted Robert Henri invited her to study with him. [He] was one of the founders of the Ashcan School, a loosely aligned coalition of artists who believed that art was akin to journalism in seeking to depict the truths of urban and modern life.” The Ashcan School’s motto that inspired Tice’s and others’ work was “‘You are painting for yourself, not a jury.'” 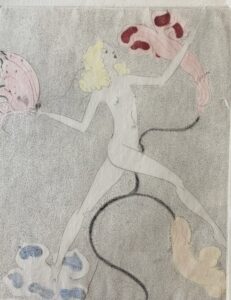 The School’s motto is hard to ignore in consideration to Tice’s reputation during her lifetime, which was characterized by her nude drawings. According to Somerville, Tice’s infamy/fame, depending on how you viewed her work at the time, “became the talk of the town when a series of her nude drawings exhibited at Polly’s Greenwich Village restaurant became a target of moral reform.”

Tice’s unconventionality, however, is exactly what Vanity Fair and little magazines–such as Bruno’s Weekly, Quill, Rogue, and The Blind Man–embraced. This juxtaposes pieces such as the following New York Times article title from 11 May 1915: “Clara Tice Lights Guide Bruno Garret; Many Drawings by Greenwich Village Artist on View for the Discerning. Purple Hair on One Girl Not All the Works Are Nudes — Some Show Arabian Nights Scenes — Colors Are High.” It is no surprise, then, that Suzanne Churchill notes she was acquainted with unconventional figures such as Duchamp, Man Ray, Charles Demuth, Beatrice Wood, the Baroness Elsa von Freytag-Loringhoven, and Mina Loy. 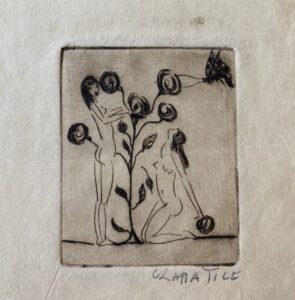 Brief anecdotes seem to best capture Tice’s persona. For instance, one of her sketches accompanied Mina Loy’s “Virgins Plus Curtains Minus Dots” in Rogue. But it was not just her art that attributed her with the title of Queen of Greenwich Village. Rather, it was how she approached her work, which Crowninshield  finds to be a merging of “oddity and surprise.” All of her work is “play,” he writes, “because she never consents to work at a job unless she is permitted to regard it, primarily, as play.” 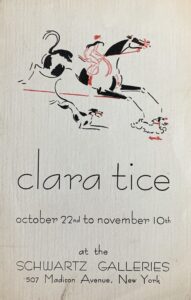 Typically categorized as a Dada, Somerville’s following characterization of Tice continues to get at why she is remarkable even beyond her profession. Interesting in her own right, she was

a protoflapper, she bobbed her dark hair and wore knee-length dresses, often of her own design, all for comfort rather than fashion. Tice walked the streets of the Village with a Russian wolfhound in tow. In the spirit of the New Woman of the era, she advocated economic and professional freedom for women, believing that ‘brains and the ability to do things are the things that attract men.’

In spite of her compelling persona and oeuvre, and in the words of Crowninshield, will Tice continue to stay “on the road to immortality”?