West-Running Brook is a collection of poetry written by Robert Frost. It was first published in 1928 by Henry Holt and Company. This particular edition was signed by Frost in Albany, New York. 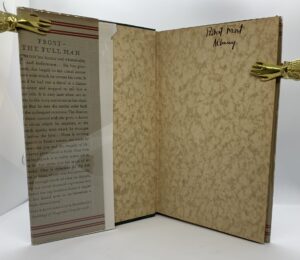 The inside dust jacket holds an excerpt written by Jessie Belle Rittenhouse in Braithwaite‘s. Rittenhouse was a well-known literary critic and anthology organizer during her time. According to the Poetry Foundation’s website, she was a staunch advocator for modern poetry. The dust jacket begins with praise: “Frost has humor and whimsicality and mellowness.” She, also, acknowledges the duality of Frost’s talent, as “there is nothing negative in Frost’s nature,” though “he knows the pity and tragedy of life.”

Besides Rittenhouse, the back of the book contains an excerpt penned by Joseph Auslander, who was a poet and translator among many other things. Concerning West-Running Brook, Auslander writes that this particular compilation of poetry has “much less of the domestic drams and more of the personal song than usual.”

Split into six sections, West-Running Brook doesn’t hold some of Frost’s more well-known poems, like “The Road Not Taken,” “Mending Wall,” and “Stopping By Woods on a Snowy Evening.” However, the thematic content is similar to that of his other works. Pangs of loneliness and melancholy reverberate through the pages. For instance, “Acquainted with the Night” parallels George Willard’s nighttime walks throughout Winesburg, Ohio, as the poem’s speaker expresses his/her familiarity with nighttime: “One luminary clock against the sky // Proclaimed time was eight wrong nor right. / I have been one acquainted with the night.” Yet, “The Rose Family” is tinged with both humor and seriousness, as it begins with a mockery of Gertrude Stein’s famous “a rose is a rose is a rose” quote:

The rose is a rose,
And was always a rose.
But the theory now goes
That the apple ‘s a rose,
And the pear is, and so ‘s
The plum, I suppose.
The dear only knows
What will next prove a rose.
You, of course, are a rose—
But were always a rose.