My collection of rare books began in July 2019. My father and I planned a day trip to West Palm Beach, Florida to visit Raptis Rare Books. After months of poring over their online inventory, I was desperate just to get a peek at some of the world’s rarest books: a signed edition of F. Scott Fitzgerald’s The Great Gatsby, a first edition of William Faulkner’s Soldier’s Pay, and a first English edition of Virginia Woolf’s Mrs. Dalloway. It was when I was shown a first edition Modern Library book holding both The Sound and the Fury and As I Lay Dying signed “Bill Faulkner” that I asked for water, because I became so overwhelmed that I felt faint.

I had originally planned to buy a first American edition of The Bell Jar by Sylvia Plath with some money I had saved. However, my father revealed that the purpose of the trip was to begin a rare book collection. In a befuddled mental frenzy, we began to jointly select books that would pave the way for a unique collection. We first began with writers I enjoyed, so Hemingway and Faulkner almost entirely consisted of our first purchases. (An early edition of The Catcher in the Rye with an envelope signed by J.D. Salinger and the previously mentioned copy of The Bell Jar were the only two books bought that were not penned by Hemingway or Faulkner.)

As our interest in growing the collection rapidly increased, so did the desire to find more books that would fit with what we had started with. Soon, many of Faulkner’s novels adorned the shelves, along with a signed first edition of Hemingway’s A Farewell to Arms. Unique Hemingway memorabilia, like 2 of his bullfighting tickets and one of his checks made their way onto the shelves, too.

Modernist stylistic conventions and Lost Generation literature hold my deepest interests, which is why the collection is slowly beginning to mold around this. Joyce’s Ulysses, some of Hemingway’s books from his private collection, Djuna Barnes’s Nightwood, and Woolf’s To the Lighthouse are a few works that are in the process of being added to the shelves. From here, I look forward to adding more rare books by women on my shelves and to this website in an effort to broaden the consciousness of Lost Modernists we should know and hear more about, but don’t.

A photograph of one of my bookcases: 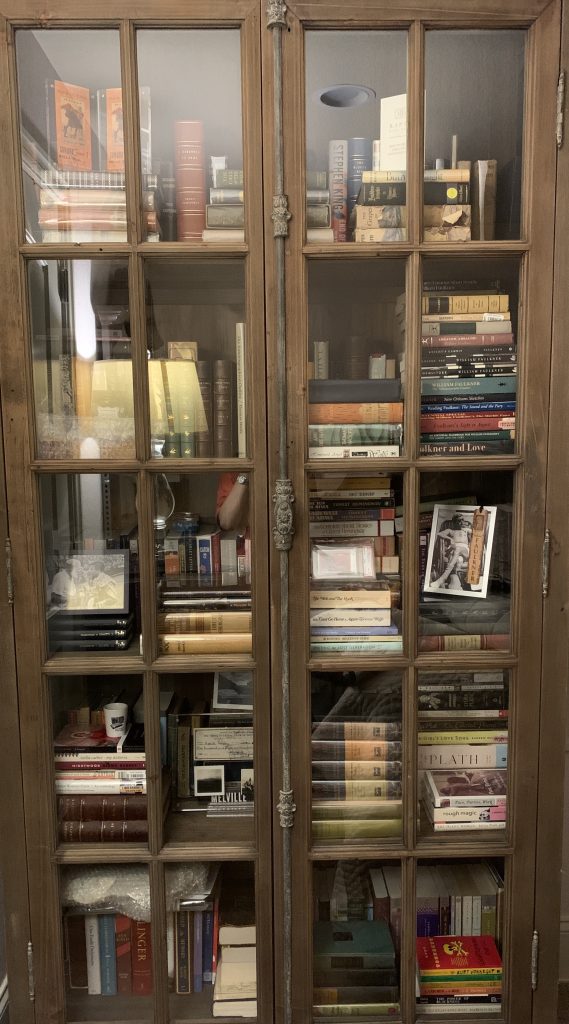 2 thoughts on “The Rare Book Collection at a Glance”