You are a self-proclaimed “Polish literary critic and theoretician.” Can you touch on your work and the writers your work centers around?

I started as a reviewer for “New Books,” the major magazine of literary criticism in Poland. Later – when I was writing my doctorate – I started publishing in “Creativity,” “Topos,” and “Arcana.” So far, I have published one book and over 60 texts, which I’m not ashamed of, even though a lot has changed in my writing. Today, I do many different things at once: I’m a literary critic, literature researcher, and co-translator. I feel comfortable in each of these roles and like to change the space in which I move. This past summer, I prepared a Polish translation of Thomas Pynchon’s famous essay about Luddites with a friend. (Now, we are working on his short story collection Slow Learner.) In June, I successfully defended my PhD thesis about Warsaw in Polish postwar prose.

Your monograph “Stream of Consciousness and the Internal Monologue in Polish Prose in 1956-1980” looks specifically at the stream of consciousness literary technique used by popular Modernist writers, like Virginia Woolf, James Joyce, and William Faulkner. Which connections concerning this technique do you see between Polish Modernists in comparison to English, Irish, French, and American Modernists?

You probably know what a kick it is for your ego when you read something you wrote 5-6 years ago. When I recently re-read my debut monograph, I thought “oh my god.” This is not because I disagree with the thesis of this book, but I’m rather concerned with my mannered, super-strict writing style from that time. However, I still agree with the general distinction I made in this monograph. In my theory, “stream of consciousness” and “inner monologue” are two separate narratives, which are manifestations of human “inner speech,” understood as silent speech – the basic form of human thinking in words. I defined “stream of consciousness” as a narration based on the constant play of the senses, memory and imagination, while “internal monologue” – well-known in 19th century novels – is a narrative technique based on memory and imagination. This narrative dichotomy makes sense when we look at the Polish post-war Modernist literature. 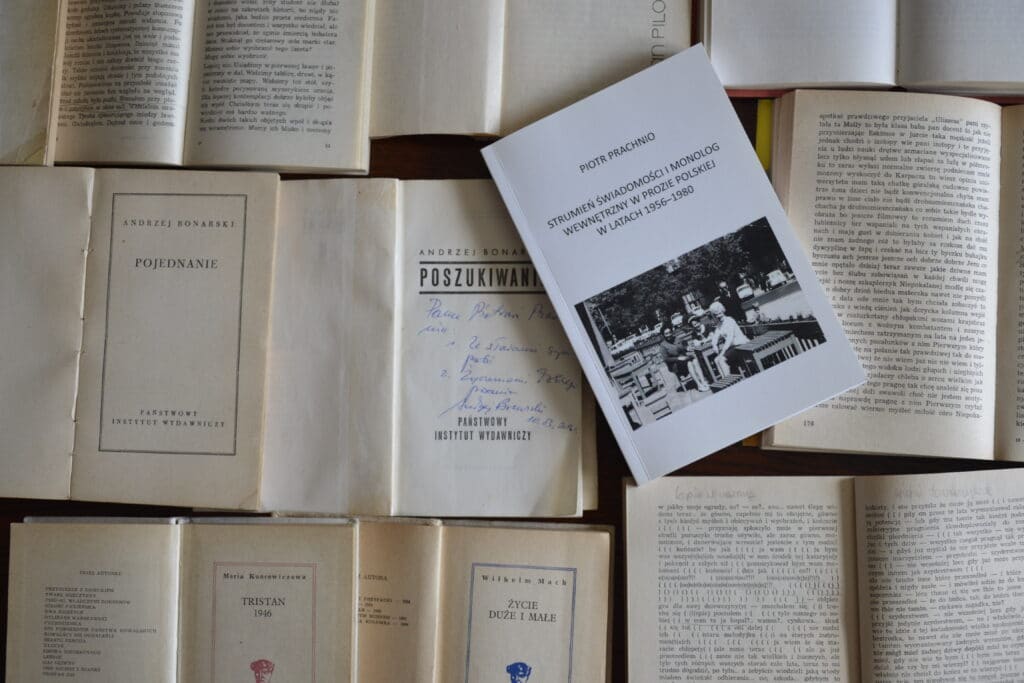 Connections between Polish writers and foreign Modernists varied, as the three canonical Modernist authors are, in my opinion: James Joyce, Marcel Proust, and William Faulkner. Polish writers referred to the works of these writers concerning both topic and style. Polish Modernists were interested in thought-processing narration, unusual typography, and – above all – the Modernist conception of the human, time and space. It’s easy to find examples in Polish post-war prose of long chapters without punctuation marks, such as in the XVIII episode of Ulysses, or a novel with one super long sentence with the addition of the phrase “And they walked all night” (I’m talking about Jerzy Andrzejewski’s The Gate of Paradise from 1960; English translation James Kirkup). My idea of ​​interpretation is to present these writers as one Modernist formation that had common precursors with a shared interest in psychology and human inner-speech, along with similar ideas concerning narration, typography, and constructions of time and space in a novel. It’s important to say that Polish Modernists found themselves on the outskirts of Polish literature in 1956-1980, so we can say that they are in some sense “lost.” Readers at the time did not remember their Modernist experiments, and researchers did not pay attention to them from a historical perspective either.

Most would argue that the Modernist literary period ended around 1940. Is 1956 when Polish Modernism really began to take off?

That’s a good point. I would say that Modernism developed differently in individual countries and lasted – in some of them – all throughout the 20th century, especially in Eastern Europe. The beginnings of Polish Modernism differ in year, but it is generally assumed that it began between the years 1890-1900. In Polish literature, the Modernist canon encompasses the works of writers such as Waclaw Berent (1878-1940), Karol Irzykowski (1873-1944), Stanislaw Brzozowski (1878-1911), Stanislaw Ignacy Witkiewicz (1885-1939), Bruno Schulz (1892-1942), and – at the same time  – authors who also published in the second half of the 20th century, like Witold Gombrowicz (1904-1969), Miron Białoszewski (1922-1983), Zbigniew Herbert (1924-1998), Czeslaw Miłosz (1911-2004) and Tadeusz Rozewicz (1921-2014). For this reason, Modernism in Poland is a very diverse and long-lasting tradition. As you might guess, in Polish literary studies, there is no stable definition of Modernism that would apply to all these writers; I have only mentioned the classics here, and not all of them. Alongside these classics, both in the first and second decades of the 20th century, there were always some “lost Modernists,” whose work we are still discovering in Poland. A recent example of a “lost Modernist” writer who entered the canon is Zygmunt Haupt (1907-1975).

In the years 1956-1980, the “lost Modernist” status still applies to many writers, namely Andrzej Bonarski, Marian Pilot, Jozef Lozinski, Stanislaw Czycz, Wilhelm Mach, Wlodziemierz Odojewski and Urszula Koziol. They are considered Modernists because they tried to adapt the novel to new anthropological visions of what it means to be human, mainly in the field of psychology. In their works, we can easily find references to the Modernist “world canon,” but at the same time they created original works in which they described Polish reality and history. 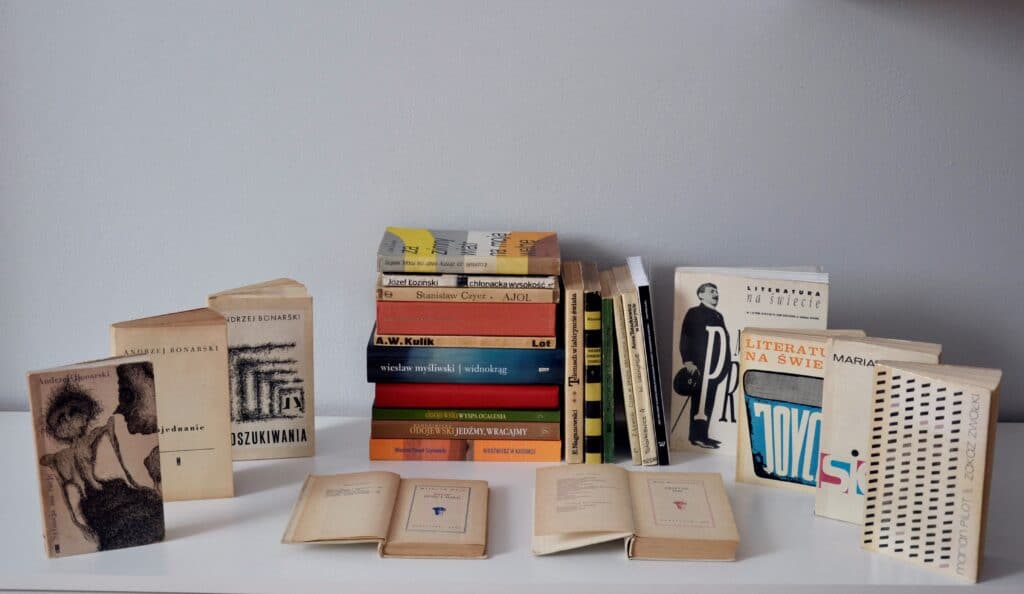 I think that Modernism is associated with certain questions about human nature, motives, and themes. A clear reference to the Modernist influence in Polish prose is the weaving of internal monologues while protagonists are described in bed, like Marcel from Proust’s novel or Molly Bloom. The motive for the technique of the internal monologue is also, more generally, nighttime. An example is Big and Small Life (1959) by Wilhelm Mach, in which the protagonist spends the night remembering his childhood in front of the body of his dead father.

In Polish prose that holds narrations of internal monologue, memory becomes, like in Proust’s novel, the basis of identity. Polish protagonists often have traumatic experiences (typically from the war) behind them, and they try to put the pieces of their broken world back together. A bit different situation is prose that uses the stream of consciousness technique. A common motif in these novels are loners circling around their cities during the day, like Stephen Dedalus in Dublin. (The labyrinth city is another frequent Modernist theme, here.) Andrzej Bonarski’s Searchings (1966) presents the thoughts of an unnamed protagonist who spends one summer day in Sopot. His longings can be summed up in Goethe’s words, “Beautiful moment, do not pass away.” He wants to “stop the clock at a point 0,” as he mysteriously attempts to avoid the past. Why? His avoidance of the past, I think, is a reaction to an ineffable war experience.

Polish Modernist literature, after 1954, deals with the past in two different ways: internal monologue-centered prose reflects on the past and tries to come to terms with war trauma, and stream of consciousness prose ignores the past, so the protagonist tries to build everything from point 0. Between all of these motifs, there is another Modernist theme: the tension between objective time, calculated by the hands of a clock, and subjective time/”inner time.” The complications of their coexistence can be seen in Ulysses and The Sound and the Fury, such as when Quentin destroys his grandfather’s watch.

So far I have mentioned three non-Polish Modernists – James Joyce, Marcel Proust and William Faulkner – that I would consider to be the most influential writers among Polish Modernists from 1956-1980. The prose of Virginia Woolf, John Dos Passos and Alfred Döblin were of course read in Poland, but they didn’t have such an impact on Polish writers. To be exact, James Joyce and Marcel Proust were well-known in Poland before World War II. In this period, several Polish writers entered a dialogue with Proust and Joyce in their short stories and novels. Adam Ciompa in Big Letters (1933), Marian Promiński in Roses in Concrete (1934), and Adam Tarn in Father’s Image in Four Frames (1934) tried to create their own variations of Joyce’s stream of consciousness technique in their own prose. Common motifs in Proust’s novels are evident in the early prose of Jarosław Iwaszkiewicz and Tadeusz Breza’s novel Adam Grywald (1936) in which Proust is explicitly mentioned. Even today, I remember the quatrain that crowns this prose triptych. In English it would be written as:

I will come and lie down, cheerful and sad,

take a book written by Marcel Proust,
wrapping myself in a foreign world as if in canvas,
until the tart taste of the smile wets my lips.

If you had to choose 3 Modernist texts, regardless of the nationality of the writer, which would you say are the most important to read?

I say that these books are: In Search of Lost Time by Marcel Proust, Ulysses by James Joyce, and The Sound and the Fury by William Faulkner. I think of these works as the three peak achievements of Modernist literature. Reading, but also studying, these novels is pure pleasure.

Are there any popular Modernist books that have yet to be translated to Polish?

There are very few novels that have yet to be translated. In Poland, we are currently re-translating already translated books in the Modernist “world canon.” A second translation of Proust’s In Search of Lost Time is in the works, and I heard also about another translation of Joyce’s Ulysses. But, to answer to your question, the first book that comes to my mind is Dorothy Richardson’s Pointed Roofs – the first volume of her Pilgrimage series. Richardson’s prose is completely unknown in Poland, despite her being the originator of stream of consciousness prose. I believe she could achieve the status of Virginia Woolf. Eventually, I hope to see a Polish translation of Conrad Aiken’s Blue Voyage. So far, I’ve only read about this novel in Robert Humphrey’s monograph Stream of Consciousness in the Modern Novel. I’m interested in how Aiken portrayed this technique in a dream; it’s a wonderful literary topic that opens up great opportunities for writers.